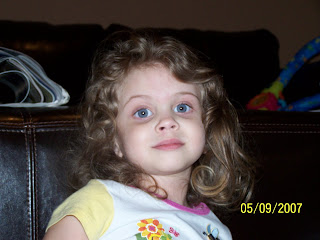 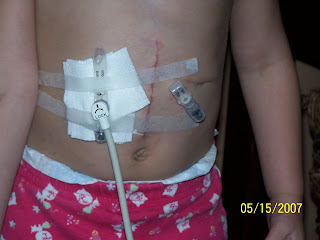 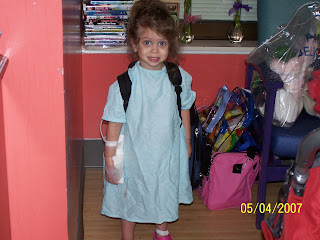 Hello everyone. I realize this update is long overdue, but things have been hard around here. Ana continues to decline. We have gone from a possible behavioral eating disorder to something of more concern. Last year at the inpatient feeding program in MD Ana made lots of progress. This progress lasted about two weeks before she began getting sick with feeds and dropping weight. We came home from KKI on 100% tube feeds. As soon as we arrived home she was admitted to a local hospital for what appeared to be a stomach virus. That puts us around the middle of April 06. By May of 06 Ana began leaking her formula from around her gastric tube and developed unexplainable pain in her legs and occasionally her arms. After 3 months of weight loss, in August 06, her surgeons placed a tube into her small intestine so that she might receive adequit nutrician. This was a success, but this tube required sedation for placement, and didn't seem to last much longer than a month or so. Around Dec 06 we decided to find new doctors with new ideas in Charleston. Her new doctors have been more intune with her care. Ana is eating almost nothing by mouth, having severe leg pain, and having small bowel reflux. Her stomach can not handle more than a couple of teaspoons of formula at a time. Her bowels also appear to be slowing down, she now requires medication and enemas to have bowel movements. About three weeks ago, Ana had major surgery to have a seperate J-tube placed... she now has two tubes in her tiny belly. She is doing well post-op and tolerating her feeds at a higher rate. She has gone from 24 hour feeds to 16 hour feeds in the last three weeks, we are thrilled she finally gets an eight hour break from her backpack.
Our biggest fear at this point is that her digestive track may be shutting down. We will make a final attempt to get her help in July. We have sent all of her records to North America's best pediatric gastroenterologist. He has agreed to see her on July 30th, and will admitt her to Boston Childrens hospital on August 1, 2007. This admission is in an effort to run some extensive motility tests and possibly find a diagnosis. We are excited and worried. We now face difficult facts. We know Ana will not "outgrow" her problems. We know she might not get better. We understand that God may take her home before we'd like. I beg each and every one of you to pray for Ana daily. I know God can perform miracles... God is Ana's only chance to get better. Please prayer for Ana and pray for comfort through the pain she has on a daily basis.